Yesterday, my boyfriend and I made plans to get to work early to catch a local musician performing on The Voice. We don’t have TV so if we want to watch live shows, we have to use the one at work. This singer had recently been knocked out of the competition, but there’s a chance to bring him back as a wildcard. We wanted to watch the live show to vote him through, so instead of making dinner at home, we decided to just pick something up and have it at work.
Our first choice was Taco Bell, but with three cars ahead of us and three more behind, we found out that they were out of flatbread, and my boyfriend couldn’t think of anything he wanted that didn’t involve flatbread. We waited in the drive-thru discussing where we would go instead. He suggested McDonalds, but Jack in the Box was right across the street and it’s be a while since we’ve eaten there. He doesn’t like Jack in the Box, but was willing to go there because I really like their curly fries and Gold Peak tea.
We place our order and he asks for a substitution after the woman has already read the total, so she says she’ll have it ready at the window. It always takes a long time to get through this drive-thru no matter what you order, but we still have time before the show starts. When we pull up to the window, the lady says “Okay, you have a #7, a #28…” I nod. She stops and says “No, that’s wrong…you had the two waffle sandwiches…” I stop her and tell her that’s not it. She comes up with a third order and I say, “No, it was right the first time. With the #7 and the #28.” She looks confused.
“Did you already pay?”
*queue Ted Mosby voice-over: Kids, if someone asks you if you’ve already paid, the answer is yes*
“No.”
She gives us a total that seems a little higher than it should have been, but we requested a change, so maybe it was right. I pass the card, she runs it through the machine and hands back a receipt to sign. I wait for her to pass a pen, but she stands there looking at me like I’ve sprouted a second nose. I ask for a pen and once she realizes what I’ve said, she hands one out. My boyfriend signs and as I go to pass the ticket back, I notice it says “2 waffle sandwiches.” I stop and compare it to the receipt my boyfriend is holding and he tells her she charged the wrong order to his card.
At this point, she finally calls over the manager who looks at the computer for a moment and then says “It shows they paid for the right one, they just got the wrong top ticket.” That’s the excuse we were offered, but both tickets said waffle sandwiches. The total wasn’t totally unrealistic, so we just let it go. We got our bags and pulled up to a parking spot to check and make sure we didn’t get the wrong order. Everything was there, so we headed to work.
When we arrived, the show was just starting. I ate a few fries and opened up the box for what I was hoping would be a tasty sriracha burger. Instead, I found a tiny wrapped up sandwich not even the size of their Jr. Burger. I opened it up and it was missing the burger patty. 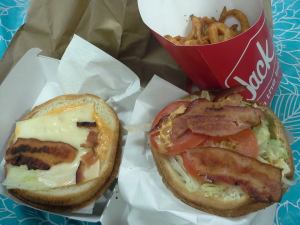 Jack in the Box has screwed up orders before. If it’s not too bad, I’ll just eat it and not worry about it, but this was just barely a BLT. For what my boyfriend paid, there was no way they were getting away with it. He called the restaurant, but they didn’t answer. Now, previously when they had left things out of the order, since we had to drive back to get it, they have given him replacement fries. He hates cold fries, so they had no problem giving him a fresh box. He said this time, because they screwed up on such an unbelievable level, he was going to insist on some hot food. His meal would be cold by the time we got back.
About this time, it becomes apparent that the singer isn’t performing on Monday, just the semifinalists, so we had no reason to get there early and no reason to grab fast food in the first place. Money = wasted. I wrap the sandwich up and we get in the truck to get some meat. He goes in to give them a piece of his mind and comes back angry with a lone burger. He said when he brought it to the manager, she said “He’s been doing this all night.” She turned to the cook and told him “Can I get another one with some actual MEAT this time?!” And the cook says “Oh, did I do it again?”
What the hell?! Again?! I’m sitting there going “Can his ass!”
So he got the burger remade (or maybe just a patty slapped on the old one since they apparently took that back…I didn’t think they were supposed to do that), but they wouldn’t remake anything else, not even fries. He said “So what am I supposed to do?”
“Eat a cold meal, I guess,” the manager shrugged.
Now, I can guarantee you I’ll probably never get to eat another Jack in the Box burger for as long as I live, because there’s no way I’ll be able to convince him to go back now. They’ve screwed up 50% of the meals we’ve purchased over the last year. It was already something my boyfriend didn’t want, and now I had to pay (extra because it was someone else’s order) for cold food on what turned out to be the wrong damn night anyway.
It might seem like I’m overreacting, and that it’s not such a big deal to have an order screwed up. That cold fast food isn’t the worst thing that can happen. You’re right. If so many other things hadn’t already been building up this week, I probably wouldn’t be ranting about it here, but damn I needed to vent. If you’ve read the whole thing, I wish I had an award to give you. You’re a good friend.
So what can we take away from this? Fast food is bad. Stick with the Meatless Mondays. And if someone asks you if you’ve already paid, you say “YES!” (That’s not me endorsing theft. That’s a plea to anyone who deals with customers to pay closer attention when taking money.)